What is Underwater Hockey?

Underwater Hockey is played by 2 teams of 6 players each. To start the game the puck is placed in the middle of the pool on the bottom. Someone screams “Stick Up, GO!” and the game begins.

The game is non-contact so there is no checking etc.  There is a goal about 10 feet wide at each end of the pool. However, since no one can hold there breath forever their is no goalie. Instead we have forwards and backs and play various formations.

An official game is composed of two 15 minute halves and we change sides at half-time. However, in practice we just play continuously, switching sides half way through practice. If we have extra players then we have subs. We sub on the fly, meaning you can sub during play. Officially a team has 10 players, so there are always 4 subs available (unless someone is sent to the penalty box).

Because the game is underwater there is very little stress on the joints, so the common injuries associated with sports like basketball aren’t a problem with underwater hockey. The water is also a great equalizer allowing men and women, small and large players, to compete on the same level.

We also travel to tournaments throughout the year. There are many tournaments in the Midwest that we can drive to. Underwater Hockey is a small community so by traveling to a few tournaments you will make friends with people from all across the USA and Canada.

When do we play? 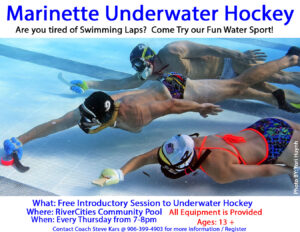